For my Diploma Thesis at the University of Potsdam (under supervision of Dr. Nicole Stadie) I conducted a single case study analyzing the efficacy of a treatment for word-sound deafness in aphasia. If you are interested in this I would be happy to send you a pdf of this thesis (written in German). Just contact me via mail: me (at) doerte (dot) eu

Below you can find a short summery of this project

Word sound deafness refers to the breakdown of auditory analysis of speech, in contrast to the preserved abilities to perceive, discriminate or identify non-speech sounds (e.g. Kussmaul, 1877). Within cognitive neuropsychological models, the auditory comprehension of spoken language requires the functioning of several processing components (e.g. Patterson, 1988). According to Franklin (1989) a specific type of comprehension disorder can be linked to each of these components. Word sound deafness can be located at the first processing level, the auditory analysis component. Studies evaluating treatment of this disorder (e.g. Morris et al., 1996; Maneta et al., 2001) have led to contradictory results. While Morris et al. (1996) reported significant improvement after their treatment (discrimination of minimal pairs utilizing lip-reading), Maneta et al. (2001), employing a similar technique, could not find improvement. The objective of the present study is to evaluate a treatment procedure based on the techniques reported by Morris et al. (1996). In contrary to their study however the current treatment investigation was planned to evaluate treatment specific effects as well as generalization effects.

The participant in the current investigation was the female aphasic client MTR, who suffered from word sound deafness originating from a selective impairment in the auditory analysis component. Within an ABA design, baseline testing was administered before and after treatment, for functionally related and unrelated tasks as well as trained and untrained items. Related and unrelated tasks were generally taken from the LeMo diagnostics battery (De Bleser et al., 2004), but also a “Maximal Pairs Screening” (based on Morris et al. 1996) was carried out. This nonword discrimination test evaluates the influence of the amount of distinctive features on the performance. Treatment specific items were minimal pairs, matched for phonemic structure, word-frequency and the amount of distinctive features changed; varying from one to three features: place of articulation, manner of articulation and voicing. Training was conducted twice a week with seven different tasks (e.g. discrimination of CV-syllables and word-picture-matching with phonological distracters). Within this procedure the amount of distinctive features differentiating minimal pairs decreased hierarchically after reaching a cut-off of 90% correct responses per task. Item presentation during treatment changed systematically after five correct responses within each condition from an open presentation, allowing additional information gained from lip-reading, to a hidden presentation with no lip-reading possible. 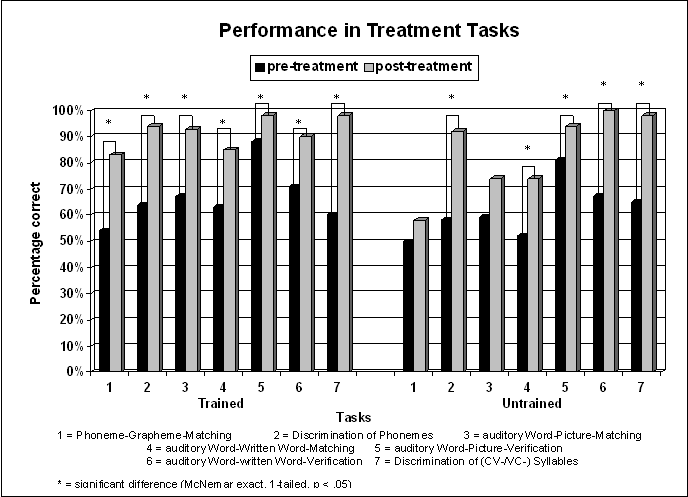 Figure 1: Performance in the treatment tasks before and after treatment for trained and untrained items

In a follow-up assessment eight weeks after the end of treatment, results generally presented stable. There were no significant changes for the unrelated control tasks, the more complex discrimination tasks and the untrained materials. Concerning the trained material however, MTR’s performance for one of the seven tasks decreased (Phoneme-Grapheme-Matching: McNemar Exact, 2-tailed: p=.021), whereas performance in the other six tasks did not change.

The analysis of treatment material (trained as well as untrained) and more complex discrimination tasks points out the efficiency of the applied treatment. The fact that there was no improvement in other functionally related tasks and in two of the treatment tasks (for untrained materials), can be explained by the various other impairments of the client, e.g. her severe output disorder. The follow-up assessment indicates that the period without specific treatment did not effect the performance substantially. The applied procedure hence presents as an effective tool for a lasting remediation of word sound deafness. Thus even if this technique is not beneficial for all clients (cf. Maneta et al., 2001), the current results add evidence to Morris et al.’s (1996) conclusion, that this treatment procedure can lead to the remediation of word sound deafness. The qualitative analysis showed that the size of difference was important before but not after treatment, indicating the importance of distinctive features as an influential parameter in word sound deafness. This treatment study thus employed a design that did not only allow to report significant improvement in quantitative form, but also made it possible to look closer into processing before and after treatment on a qualitative base.

Publications & presentations related to this project